Can’t quite believe that it’s been almost five months since my last post here – loads of reasons for that March and April were just nuts. The swell just did not die down and I was so busy making a pig of myself that to be honest I just could not be bothered to post.

My new (not now) Mana 9’0 was my turn to board throughout the run of swell and once I got dialled in I almost stopped missing the 9’3″, not quite though.

Having decided that I could not do without a proper van and getting a blazing offer from Peugeot to buy back the Popemobile providing they could have it for the 1st May I once again found myself without transport for what was meant to be just 4-6 weeks.
Little did I know! – Soooo back on the motorbike with the ULI Lopez for the Summer – which just happened to coincide with the longest wave drought that I can remember, followed by me starting to get back on the push-bike and ride to work. I just could not take sitting in the back of the POLO one more day. We also had a few cycling jollies that I had to attend so there was an incentive to get a few miles under my sorry ass so that I would not let the side down (too much!!)

Then we get the start of the Tour De France so three weeks of catching up with the greatest show on earth and then – well I just don’t know really I suppose that for a while I just ran out of steam as far as the blog was concerned.

I found myself checking into the forums less frequently and being less ‘revved’ and inspired by some of the stuff that was going on, things just did not seem as fresh and exciting as they used to be. Where once everybody who paddled out seemed to be breaking new ground and we all had something valuable to contribute there were now too many and opinions and rules all saying the same stuff that had been covered ages ago and yawn . . . and as a result my ‘SUP Stoke’ levels began to wain somewhat. I had no doubt that come Autumn, with a van and some decent waves I would regain my enthusiasm but for the moment I just was not feeling the love.

Around this time Mark rang me and asked if I would be interested in his Sub Vector – MMnnn not had one of those (was this the stirrings of a SUP Boner?) – had not even ridden one – ‘Scwhinng!’ – so I went for it and . . . for six weeks it just sat in my board store looking sorry for itself.

My get up and go had not completely got up and gone – I was being seduced and spoilt by my SEVEN Axiom. Jeez what a bike – cycling has been part of my life almost as long as surfing, it’s how I earn a living but this bike, this one’s special.

Not the lightest – maybe not the quickest but smooth and satisfying – within a few weeks I found myself doing all the things that I promised that I would not do – working on cadence – checking averages – drafting tractors – overtaking cars – generally being a total cycling twat and recording it all on another new toy that we had been selling in the shop the Bryton Ryder 50GPS. These puppies give loads of useful info and are dead easy to use – we still have not read the instructions – like we would anyway. Speed, time distance, heart rate, ascent, descent, slope %, direction and a load more besides. 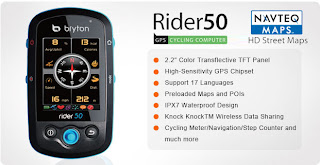 If you click on this link you should get an idea of how useful the Bryton can be as a training aid without having to shell out excessive amounts of dosh. £279.99 for the all singing all dancing HRM version.

08/01-17:49:48: “Activity Type: Road Cycling”
Loads simpler that the Garmin Edge to use and a couple of hundred pounds cheaper to boot. An amazing piece of kit and they do a watch version for triathletes which should be a blast for distance paddlers.

Anyway having been told that there were some delays in the production for my van Rygor Mercedes came up with the goods and delivered me a courtesy van to use until the new bus arrives, now that’s customer service and they delivered it to my door – oh yeh – is that surf I hear? You just can’t beat a van for stoking up the surfing horn. God I love vans.

Surf’s been shite since it arrived though on shore short period stuff – until this weekend and an early morning Sunday opportunity was looking good. Wetsuits and board (Sub Vector) loaded Gwithian beckoned.

Unload the van – pull out the wettie and, – shit that’s a lot of fleece – I had brought my winter suit with me – no way was I going to poach in that, fortunately I also had my shortie, it was 7am, grey, mistly drizzle and I was going in. Changed up locked the van and I don’t remember this shorty being pale blue. Cock – I had put it on inside out. Amazing how it’s so easy to get out of the rhythm of things.

So the Sub Vector – my first impression was that it was heavy, significantly more so than my Naish boards but with the stiff onshore breeze and choppy conditions that I paddled out into that might be a good thing today. Jumping onto the deck for the first time and paddling through some waist high chop the board was indeed rock solid and the nose cut through and rode over the oncoming mush without any drama, good sign. However turning side on to the wind to patrol across a face or turn to catch a wave had me staggering around for a minute or two like Bambi with a broken leg. My ‘sweet skills’ had deserted me.

It felt like the wind was getting under the high boxy rails and tipping the board, my reaction was to over correct and it was not until I sussed that the board would only ‘tip’ so far and the opposite big rail would come into play that I began to settle down a bit.

Keeping things in perspective I don’t think that I did that bad. Picking off a few very messy set waves in adverse conditions (I did not see anyone else out) the board began to sow me some of the magic that has been accredited to one of the original hi-performance short stand up boards. The odd wave allowed me to work the face and fire off down the line, nothing too exciting but there was potential there. This was the first time back on a board for six weeks!

I missed the sheer nose kick of my Naish boards, The Sub Vector did not ‘pearl’ in the mush so much as ‘bog down’ slightly. There was always enough float for it to recover but a couple of times the submarine’ing caused just enough delay for me to miss the catch. I’m not criticising the board for one minute, in fact it reminded me a little bit of the Bonga Perkins 9’6″ that I had some time ago. No the issue was with me my foot placement was poor and I was rusty and awkward and it was probably a testament to the board that I caught anything at all. Throughout the session I kept in mind that the next time would be loads better. I must have started to get it wired as I kept telling myself ‘Last wave’ – then shortly after – ‘Just one more’. it’s alright this paddle surf stuff.