Been back nearly a week now and the trip is beginning to feel like some surreal experience that happened to someone else. Red summed it up succinctly on the way back on the plane.

‘That was bloody intense’.

He was right. From arrival at Agadir airport and for the next seven days we were totally immersed in the hospitality that was Moroccan Surf Adventures. The routine, although clockwork :
Sleep – wake – eat – surf – eat – surf – eat – drink – sleep
was relentless BUT never intrusive or regimented. We instantly fell in with the easy going manner of the Surf camp and with the minimum of fuss got into the groove.

We came to surf and that’s exactly what Denny and the surf guides and drivers, Hicham (who took most of the pictures) and Rashid enabled us to do even when it seemed unlikely that we would find any swell.
They always put us on waves.

THE MOROCCAN PERFECTION THAT IS MACHINE GUNS

The mix of surfers that we found ourselves with helped a lot and during the week we met some great people and had a barrel of laughs. There were a couple of couples that were novices and some independent travellers that very quickly found themselves part of the overall house group along with the three of us and another group of five (KernowSurf Doc that were always on 24hour call out), that also happened to be from Cornwall. Small world surfing.

(Man stumbles into the Doctors office in a blind panic, trousers around his ankles , rushes up to the desk and flops his old man down between the stapler and the stethoscope.


‘My God man’ Exclaims the doctor with the fear of god in his voice. ‘What’s the problem?’

Not so far from the truth that.!

As far as me being the only Stand Up paddle-surfer, Denny’s crew accommodated me and the board with the minimal of fuss and bother and apart from a couple of sessions when I felt that it was prudent to sit out a session (down to busier more focused peaks rather than conditions) I don’t think that I was too out of my depth. Even during the post surf decontamination process people would still talk to me.  I was generally able to get stuck in most days with the advanced party, and don’t think that I let the Stand up crew down too much. In fact several of the house guests seemed genuinely curious, once they stopped sniggering! 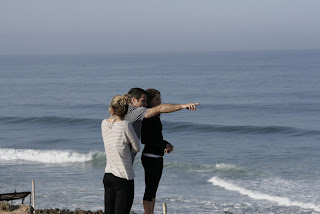 Anyone riding a standup, with some time on their hands and looking for a reasonably close, warm surf trip would be well looked after on a daily basis by Denny and his house-crew, Sophia, Russell and MoMo the cook, could he cook? So much so in fact that the distinction between staff and guests was often subtly blurred.

Denny said at the outset

‘Make yourself at home’.

And you do.  The camp has claimed some mighty scalps, Taj Burrows, Taylor Steele, Sam Lamiroy to name but a few. It’s easy to see why. I don’t think anyone would argue if I said that the stretch of beach from Banana Beach to Taghazoute was not exactly a pristine piece of coastline, but the area does enjoy some cracking and consistent swell, especially if you know where to look.

Water temperature when we were there was supposedly 20’c , to me it felt more like 15’c. I was fine in boardies and a rash vest and occasionally a tube suit (2mm shortie john). The other guys needed their 3/2 full suits. First session at Devils Rock and I went in without my Vibram’s – my feet were pretty much shredded on the rocks in the shore break. My shins caught it inside at Machine Guns. One week later and the itching as the scrapes and cuts heal is driving me nuts.

The practicalities of taking a Stand Up are only limited by the airlines. I think I was lucky with mine. I double bagged my 9’Mana and slipped my one piece Werner Nitro in it’s case in between the two bags. Total weight of the board bags and paddle was 19kgs, having booked a surfboard I had a total allowance of 32kgs. No problem.  BUT officially the maximum length should not have exceeded 2.5meters(8’2 1/2″). MMnnn. My 9′ Mana in the Nash bag inside a 10′ bag should really have had me going back to the car for my ULI Munoz. I reckon I just got away with that.

Had we been gone for longer than a week I think that I would have taken my ULI Munoz by choice anyway. The board is lighter than the Mana and possibly a tad more lively. It does take a little more adjustment and acclimatisation to get the best out of it so a week would be iffy whereas the Mana is instantly doable. Next time however there is the distinct possibility of taking a custom 7’10 . . . more of that later. All in all  fantastically, selfish, fun packed trip, that does not leave you wanting. Big thanks to all who put up with me and especially Charmaine for springing the surprise.

SUP and the City, Birmingham UK