It’s strange how fast things can go downhill sometimes, and how soon after your highest high’s you get your lowest lows. Our Costa Rica trip was amazing, surfed everyday bar one sometimes twice a day and occasionally three times. Totally ace. But I reckon I sort of peaked in Nosara, and everything since has been cold, wet grey and painful. Here’s why.

I had exchanged a couple of emails with Jim Weir from ULI and had arranged to hook up with him for a couple of days to say hello and catch a few waves, that was going to be on the 19th of Jan. 17th of Jan I was getting down to my usual morning business and just paddling out for another wave when as I stepped back to lift the nose up over the incoming wash I heard / felt a loud ‘pop’ and the lights went out. The left to right swell had taken the nose of the board sideways along with my lower leg. Trouble was the rest of me was going the opposite way. My first thought was that I had broken my leg and it was all I could do to lie across the board and prone paddle back to the beach. Back on the sand it was obvious that it was my knee – ‘game over’ I thought. . . . . .

OK what was that mnemonic for injuries I C E? Yeah that’s it
Ice . Compression . Elevation (actually it was RICE but I substituted Rest for Lots of Beer and L I C E did not seem such an attractive idea, plus Rest was out of the equation. So I iced it up and unbelievably managed to find a perfect knee brace in a Costa Rican super market, and drank loads of Imperial and ate Ibuprofen and paracetamol and by giving the surf a miss all the next day I managed to hobble about enough to get to the 4×4 two days after the event and drive to our rendezvous with team ULI.

The evening session was thankfully short, and choppy so I don’t think I looked too bad, the next morning we scored some small, perfectly formed waves and I had a lesson in nose riding from Jim as he cruised past me serenely in perfect trim. I was not on form, my knee was just holding up but we made the best of it and had the best, longest breakfast ever. 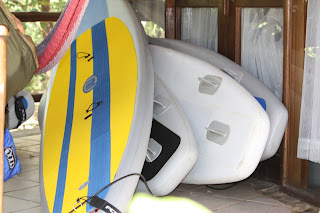 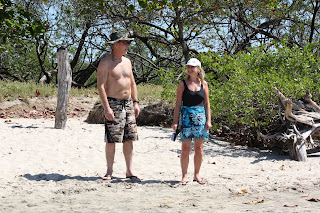 Not looking bad for 60 – Jim must be getting on a bit as well!

Jim and his pals Larry and John are the funniest guys and the least pretentious people you could wish to meet. Charmaine was in fit’s of giggles the entire time and we made a point to watch the Sponge Bob Squarepants movie as soon as we got home. I hope to meet up with them again sometime. 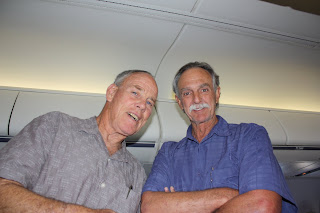 Anyway we saw out the remainder of our holiday and met up with Kath and Richard for the last few days of the trip, taking the opportunity to catch the Rodeo again. Brutal and all the more real for one of our fellow hotel guest’s getting to take part. Crazy Dave.

Two days back home and my leg from my knee to my ankle got so swollen I started thinking DVT. Having got it checked out it I realised that I was now paying the price for running on Ibuprofen for the last week of the holiday. It was almost a month later before I felt that I could risk getting back on the board. My Naish felt so scatey that I could barely kneel on it let alone stand. That coupled with me ‘covering’ my knee made me very wooden on the board. After a while I loosened up a bit but stale does not describe my performance properly. It was almost another three weeks before my next attempt during which time I had sunk so low in the miserable winter conditions that I picked up the phone to cancel my Mctavish, the conversation went something like this –

‘Hi Steve, it’s Steve Coram – any chance of cancelling my 9’0 Mctavish, I’m surfing like a girl and feel shite about everything, put on all the weight I lost pre christmas and have a bit of a water retention problem at the moment, plus it’s cold and grey, raining and I’m a bit pissed off.’

To which he replied

‘Not a chance – man up you big Jess and stop feeling sorry for yourself. . Twat’

‘Hi guy’s where the hell is my Mctavish? I’m desperate’

‘ It’s here, it’s just arrived but as it’s THE ONLY ONE IN THE COUNTRY we wanted to bring it down ourselves’.

Oh yeah – that’s what I wanted to hear, my Mctavish is the only one in the country. Now the paranoia sets in, can I ride it? Will I like it? How is it going to compare with my Naish? Will the handle actually be in the right position? 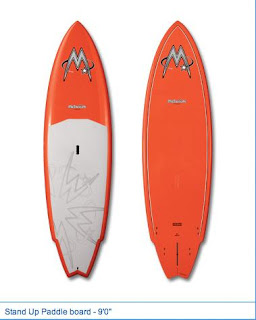 Well if the spec sheet is anything to go by it should be 3″ shorter, 1/2″ narrower, the same thickness 4 1/4″ and yet have 6 litres more volume. Which makes me think that the nose is going to be a bit wider and with the stinger quad tail carry the width further down the length of the board. I can’t imagine that it will have more rocker than the Naish – Jeez that board has more nose rocker than Elvis . . so where does all that leave me. Pretty bloody amped actually. I’m hoping that with more board in the water me, and Mr McT are going to get on just fine.